OTN (Optical Transport Network) is the Layer 1 protocol standardized by the ITU-T Study Group 15 to carry multi-gigabit signals across a fiber-optical infrastructure. NG-OTN, or Next-Generation OTN, is a major enhancement to the existing G.709 OTN Recommendations. It is designed to support all modern and legacy telecom services.

G.709 OTN specifies the transport of client-services over a range of ODU (Optical Digital Unit) containers. NG-OTN introduces a new, revolutionary type of OTN container – OSUs, or Optical Service Units. NG-OTN is intended to support all modern telecom services, such as Cloud, PON, Enterprise, Gaming and more. OSUs are designed to be completely flexible and virtually of any size, making NG-OTN also future-proof.

In G.709 OTN, a hierarchy of ODU containers is available for the transport of client-services: ODU0 (1.25G), ODU1 (2.5G), ODU2 (10G), and so forth. Lower-rate ODUs can be multiplexed into higher-order ODUs. The ODU structure operates in 1.25G granularities, and an ODU may carry a single client-service. However, in many instances the bandwidth of the client-service may significantly differ from 1.25G or its multiples. Accordingly, the ITU-T SG15 is now working on a modification to the OTN recommendations, aiming to introduce the new NG-OTN OSU containers.

NG-OTN will exhibit multiple benefits as compared with the current OTN, such as-

o Transport Container Optimization: As compared with the 1.25Gbps granularity of current OTN, NG-OTN OSU containers’ bandwidth will be optimized to the client-services bandwidth in 2.6/10.4Mbps steps.

- Hitless Bandwidth Adjustment: A relatively simple, step-by-step procedure for OSU bandwidth adjustment has been defined. It does not require the real-time participation of an overseeing OSS (Operations Support System).

- Simplify OSS and Network Planning: NG-OTN will reduce the tasks burden on OSS systems due to the elimination of the SDH/SONET layer and will simplify overall network planning accordingly.

- Reduce CAPEX and OPEX: NG-OTN will provide superb performance as compared with the combination of current OTN and SDH/SONET while reducing overall CAPEX and OPEX.

- Compatibility with Current OTN: NG-OTN is defined to operate across current OTN systems, simplifying its deployment. 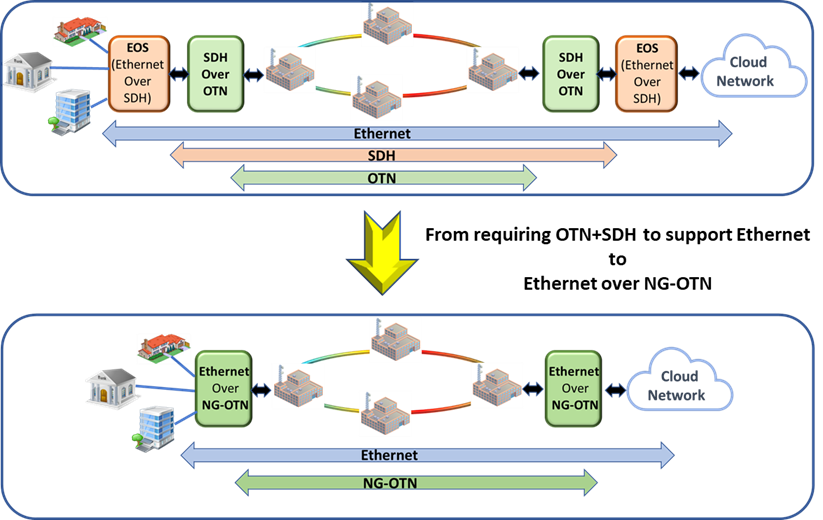