Driven by the soaring growth in mobile demand, the cellular technology is undergoing a process of continuous transition from one technological generation to another. There is a growing demand for new services, for more bandwidth and a need to support more capable smartphones and end devices. 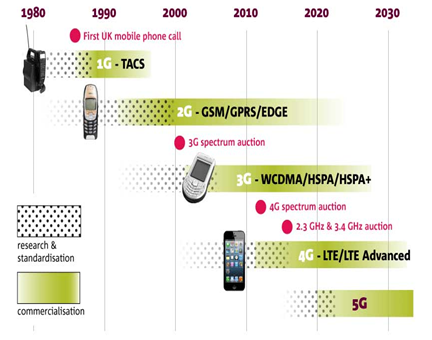 Tera-Pass offers a unique combination of ASIC and IP Cores product families that provide building blocks for the design of optical systems intended to simultaneously support multiple generations of cellular technologies. Drawing on these building blocks, OEMs can design optical systems that allow the telecom operators to optimize the utilization of their optical RAN (Radio Access Networks).

In order to distribute higher end-user bandwidths over the electro-magnetic spectrum, operators need to reduce the service area of each cell.

Consequently, the number of cells required for cellular network coverage increases from one cellular technological generation to another.

There is a corresponding need to change the design of the optical transport networks required for cellular Radio Access Networks (RAN). This change needs to be introduced in a cost-effective way.

One of the challenges facing telecommunications operators worldwide is how to build a cost-effective optical network for their RAN.

This challenge is exacerbated by the parallel growth of multiple generations of cellular technologies. The introduction of a new technology (e.g-5G) does not preclude the growth of previous generations (e.g-4G). Furthermore, each generation of cellular technology requires different capabilities to provide connectivity between outdoor antennas and their associated radio equipment (RRH, Remote Radio Heads) and their subtending controllers and central offices.

A basic characteristic of the evolution of cellular networks’ technological generations is the continuous growth in higher bitrate services at higher qualities of service.

3G networks, deployed in earnest from 2005 onwards, are designed with centralized base station controllers, each overseeing a certain number of nearby cellular antennas. The cell sites are connected to the centralized control sites with Ethernet signals. These signals operate at bitrates of 100M (FE signals) and 1G (1GE signals). 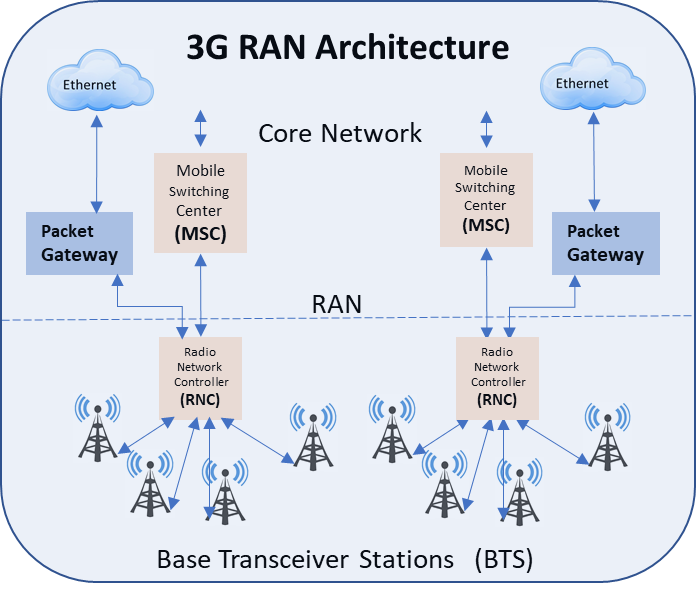 3G technology supported the introduction of Smartphones as a new, revolutionary product category, with end-user data rates of typically up to 2Mbps.

However, the pace of proliferation of Smartphones and their bandwidth hungry applications soon required a cellular technology capable of delivering higher end-user bitrates.

The next technological enhancement following 3G was the introduction of 4G, or as the prevailing 4G technology is known, LTE (Long Term Evolution).

LTE networks were designed to provide an order of magnitude increase in end-user data rates – all the way up to 20Mbps per end-user device.

4G networks commenced to be deployed from 2010 and onwards.

The step-fold increase in bandwidth and the need to reduce electrical power consumption brought about also a change as compared with 3G Remote Radio Units (RRUs). RRHs, or Remote Radio Heads, were introduced. In an RRH, as compared with RRUs, the radio unit climbs atop the antenna tower, thus eliminating the power loss associated with the 3G radio equipment coaxial cables. 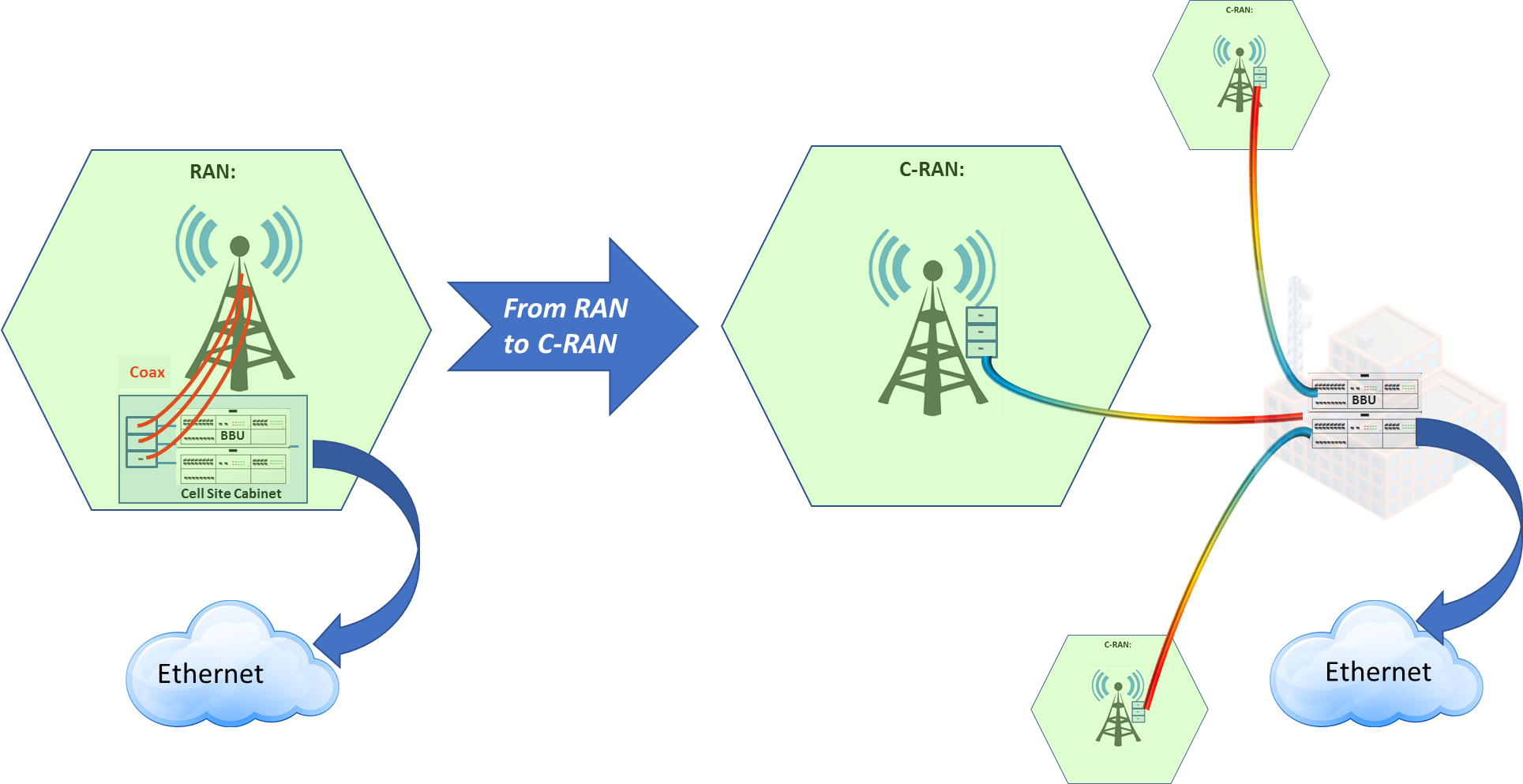 The REC generates the radio signal, samples it, and sends the resulting data to the RE (Radio Equipment, located adjacent to the 4G antennas). The RE reconstructs the received waveform and transmits it over the air.

The main benefit of this functional split is that there is almost no need for digital processing functions RRHs, simplifying and making the RRHs small and inexpensive.

In addition, the centralization of all the radio signal processing functions at the BBU also paves the way for the introduction of cooperative techniques such as CoMP (Cooperative Multi-Point), that require the advanced processing of the radio signals of several RRHs simultaneously.

The signals being transported in between the RRHs and their BBU controllers are predominantly CPRI signals. CPRI signals are all multiples of a basic rate – 614.4Mbps, or CPRI-1. Typical CPRI signals being deployed in 4G networks operate at rates of CPRI-3 (2457.6 Mbps), CPRI-5 (4915.2 Mbps) and CPRI-7 (9830.4 Mbps).

However, the transport of CPRI signals from the RRHs to their BBUs brought about a new challenge.

The most stringent performance parameters for CPRI signals transmission are minimal round-trip latency/delay and extremely low Bit Error Rate (BER). CPRI signals cannot withstand more than a 5 µs round-trip latency contribution due to the Transport functionality. The maximum allowed BER tolerated by CPRI signals is of 10E-12. In addition, the frequency deviation allowed to the CPRI signal clock as compared with its BBU clock must not be larger than 0.002 ppm (2 ppb, or parts per billion).

Connecting RRHs to their BaseBand Units (BBUs) in an efficient way over fiber optics while meeting the performance parameters of CPRI signals became a challenge. 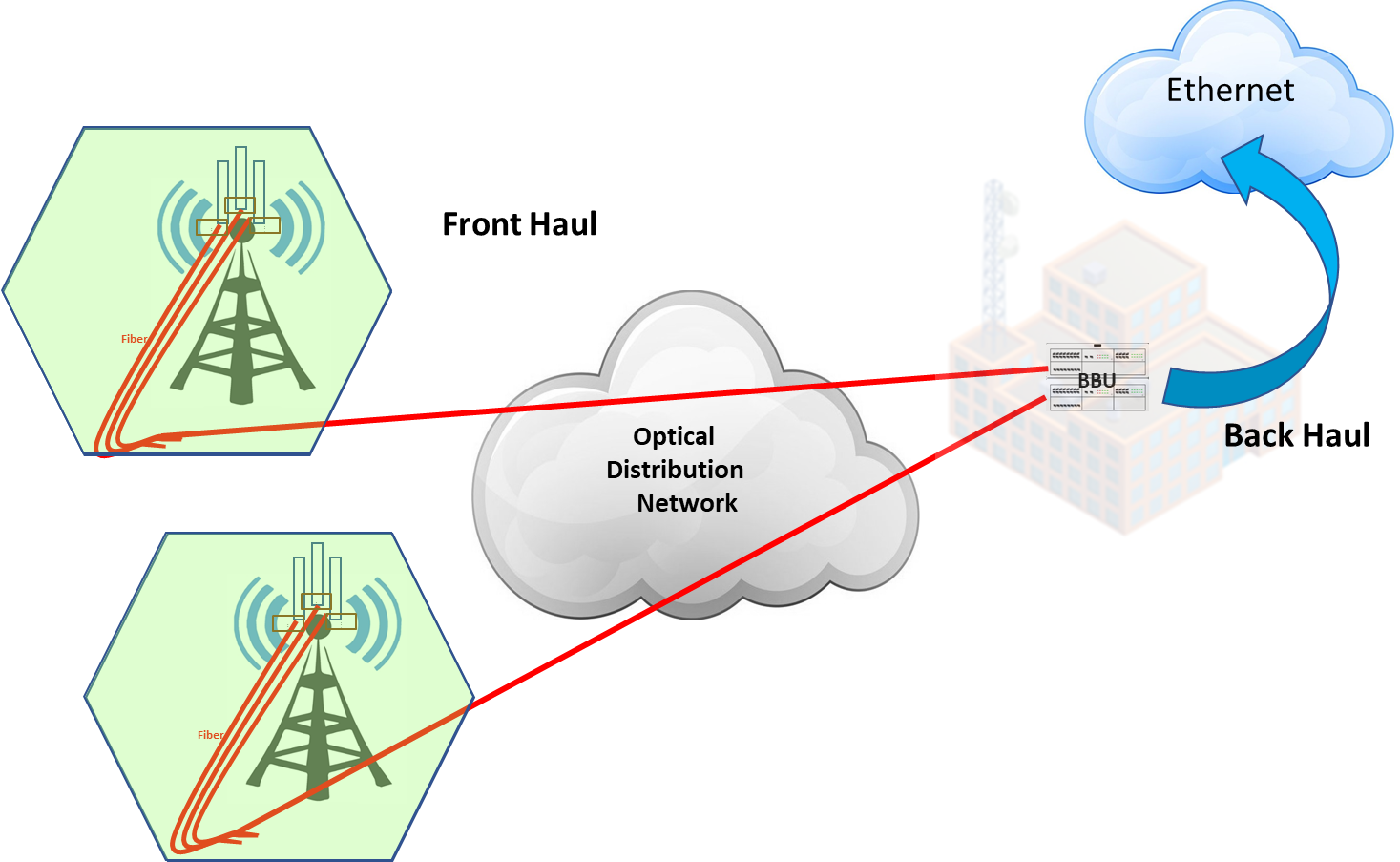 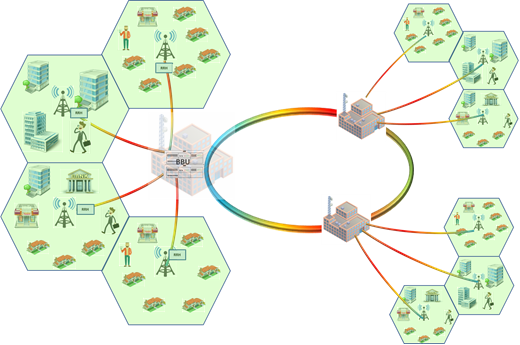 The demand for ever higher bitrates, as well as the continuous evolution in network services, such as Autonomous Cars, Internet of Things (IoT) and the continued growth in demand for high-quality video services, eventually caught up with 4G networks as well.

CPRI signals as the bearers for data transmission in between RRH units and their BBU controllers is reaching its practical performance limit. The amount of bandwidth required by newer services is overwhelming LTE capabilities.

5G cellular radio operating frequencies require 100 MHz channels (as compared with LTE’s 20 MHz), along with massive MIMO technologies. This combination will require the 5G Mobile FrontHaul networks (MFH) to transport several tens or even hundreds of Gbps of traffic over an optical infrastructure.

By way of example, an 8x8 MIMO antenna covering 4 sectors would generate 32 Antenna Carriers (AxC) signals, translating into about 32 Gbps for 20MHz radio channels. For 100MHz channels radio channels, five times as much bandwidth would be required.

The main characteristics of 5G networks will be their yet again increased end-user bandwidth performance (up to 1Gbps) and extremely low latency.

In order to address the challenges associated with the transport of these very high bandwidths, the basic RE/REC functional split of C-RAN is being re-examined. Examples include the decoupling of fronthaul bandwidth and antenna number by moving antenna related operations to the RE or enabling traffic dependent bandwidth adaptation by effectively coupling fronthaul bandwidth with the actual traffic served in the cell. The latter relies on the fact that many cell processing functions do not depend on the number of users.

Multiplicity of Signal Bitrates and Protocols in the RAN

A key characteristic of cellular networks is the coexistence and growth, over prolonged period of times, of multiple cellular technological generations.

3G networks typically require Ethernet connectivity in between base stations and central offices with signals such as Fast Ethernet (FE, 100M), or 1GE (Giga-Bit Ethernet, 1 G). On the other hand, 4G cellular networks require connectivity in between RRH units and centralized BBU pools transporting a variety of CPRI signals of multiple rates that would typically be CPRI-3 (2.5G) signals, CPRI-5 (5G) signals and CPRI-7 (9.8G) signals. The CPRI signal bitrate is directly associated with the data bandwidth that an RRH can make available to its served end users.

5G networks are designed for end-user bitrates of up to 1Gbps.

Initial deployments of 5G networks will require the transport of 10GE and 25GE (10G and 25G Ethernet signals). In addition, due to the reduced cell sites coverage area of 5G antennas, it is expected that the fiber infrastructure required to support 5G RAN will rapidly stress the availability of the optical infrastructure – either fiber or colors/λs on WDM systems. 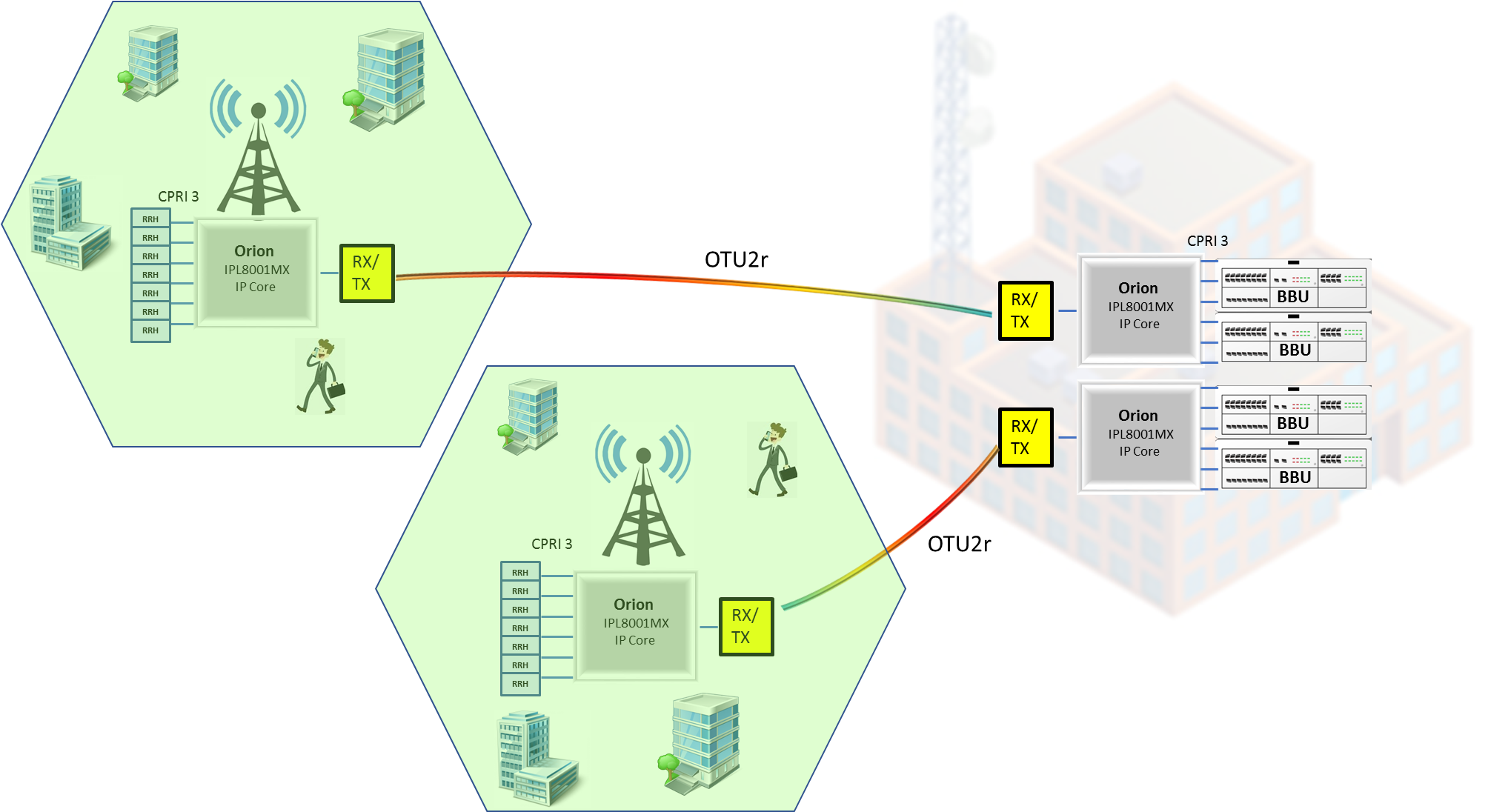